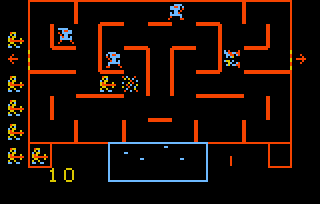 To read the manual for this game, click here.

Because of the nature of a unified-field disturbance, only one shot can be "in the air" at a time, and until it strikes a wall, monster, another shot, or the other worrior, another shot cannot be fired. Long corridors can be dangerous because while the shot is traversing the corridor, a monster can come in behind it an eat the player, who could not shoot again. This puts a great importance on WHEN the player shoots, and when NOT to shoot. Alternately, short shots hit nearby walls and can be reloaded quickly, giving the player a rapid-fire capability. The problem with short shots is there is only one change to shoot a monster or he will sneak in between shots and run over the player.

There are two objectives in The Incredible Wizard: descend as far as possible into the dungeons and score as many points as possible. Higher point totals are achieved by shooting the Worluk and the Wizard to earn a point multiplier on the next maze. Descending into the eighth maze earns the player the title "Worlord" and the privilege of challenging the Worlord dungeons. An extra player is given a fourth maze, nicknamed "The Arena," at the eighth maze entering the Worlord dungeons, and at the eleventh maze, the pinnacle of the Worlords, "The PIT." Extra players are also awarded every four more mazes, e.g. 15, 19..., and another PIT is encountered, giving the Worlords a standard to compare each other's ability, as in "I mad it to FOUR PITS!!!"

The first creature to battle is Burwor, the hopping monster. He is the slowest of all the monsters and is always visible. After Burwor is Garwor, the chomping monster. Then, Thorwor, the "lightning" monster, as he is the fastest of the three basic monsters. Both Thorwor and Garwor are invisible until the player is in the same CORRIDOR as the monster. The real world analogy is that a person walking around a corner is "invisible" until they "appear" in the front of the observer.

A RADAR at the bottom of each maze tracks these "invisible" monsters. Although the radar has no lines to show the walls in the maze, one can get very good at knowing where a monster is located in the maze. The radar is critical in tracking Thorwor as he moves too fast to rely exclusively on reflexes. DON'T WALK AROUND A CORNER JUST BECAUSE NO MONSTER IS VISIBLE!! Check the radar first.

Clearing all these monsters out of a maze brings out Worluk, the flying monster. Worluk is visible all the time and will try to escape out of one of the two magic doors. He is very fast and can be avoided if the player chooses to do so, but then double score may not be earned for the next maze. Should you try and stop him, maneuver towards the door and cover it, so when Worluk tries to leave, you are in position to shoot him. After the Worluk escapes or is shot, the Wizard may appear.

The Wizard comes out more frequently in higher mazes, and is more difficult as the player descends deeper into his dungeon. He disappears and reappears and cannot be tracked by radar. Avoiding the Wizard is impossible, as he will teleport closer and closer to either worrior until one of them has "bit the dust" or has shot him. Shooting the Wizard makes his magic waver and the entire dungeon shakes with his demise. He cannot be completely destroyed and will be back in a subsequent maze. While he is walking around, he is shooting lightning bolts in random directions waiting for a mistake.

To battle the Wizard, one can try to anticipate his movement into a corridor and shoot down that corridor, or one can wait for him to walk in front of you and shoot him then. The latter method has a serious drawback. While waiting for him, he is reappearing closer and closer to you, and he might show up right behind you! Shooting the Wizard doubles the next maze's points, so shooting both the Worluk and the Wizard is good for QUADRUPLE (4x) points in the subsequent maze.

Reviewer: idek15 - favoritefavoritefavoritefavoritefavorite - March 12, 2019
Subject: I'm a Kid Again! Thanks!
When our family got the Bally Astrocade for Christmas, all our neighbors and friends --kids and adults alike-- filled our home for the whole holiday break playing on it. There were LINES of visitors winding through our grand old Victorian house nibbling snacks and waiting for their chance to play on the arcade. This game was one of my favorites, and once the holidays were over we kids finally got a chance to get good at it. Really grateful to play this again. I have been laughing at the sounds and filled with glee! Thank you, so much, Internet Archive!

Reviewer: wongojack - favoritefavoritefavoritefavoritefavorite - December 31, 2014
Subject: Yes it was incredible
I never experienced the Astrocade BitD (or even heard of it), but this game above most others gets mentioned as the thing I most missed out on. Looking at it now, it is JUST another arcade conversion, but it must have been an amazing vision of the "Arcade at Home" when it was released.

This game is a clone of the arcade game Wizard of Wor and by all accounts a very good one. Thanks to the Internet Archive, you can now experience this gem of the Astrocade without coughing up hundreds of dollars to try and find a working console, cart, and controller which is saying something because the Astrocade was/is known to fail much more frequently than other classic consoles.

Enjoy your minutes of pleasure with one of the truly great and most sought after classic gaming nerd prizes of all time.